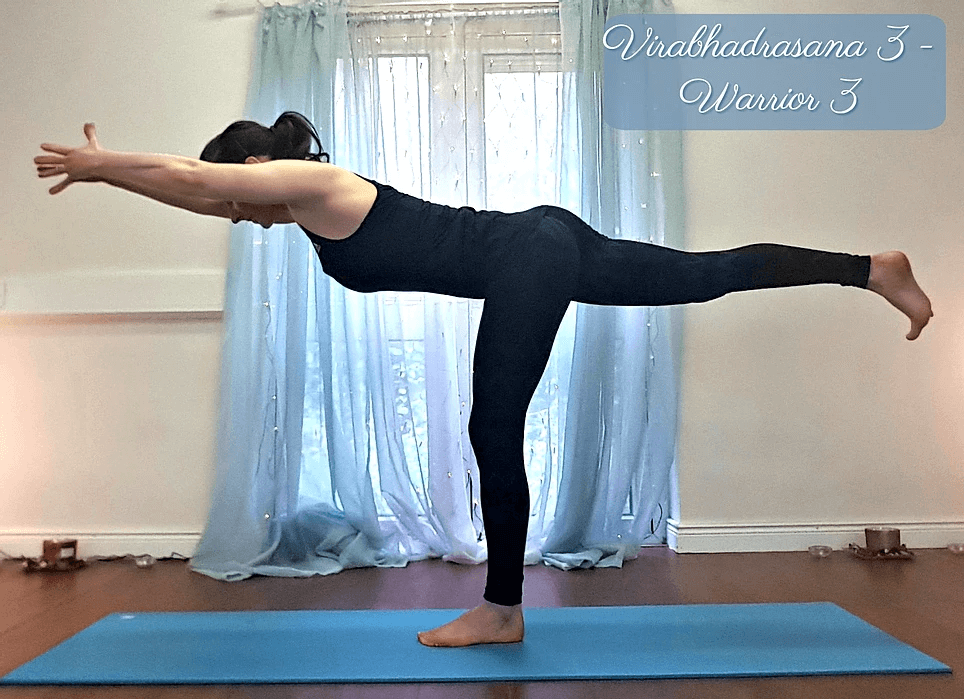 April Pose of the Month

April brings us Virabhadrasana III. In March we spent time stroking our internal fire and activating our Solar Plexus which is related to our personal power and motivation. Now its time to begin to take action towards your vision, goal or ambition otherwise it will remain just a dream. Virabhadrasana 3 will encourage you to charge forward and to take that action.

The mythology behind Virabhadrasana – The Warrior Poses isn’t a pleasant one. It stems from a family feud. A lord named Shiva married the daughter of a powerful king named Daksha who opposed the marriage between Shiva and his Daughter and cut her off from the family. She went to her father to try and appease him but to no avail, instead he humiliated her. She got so angry with her father that she decided to sever all ties to him… including her earthly body and killed herself . When Shiva heard of this news he was deeply saddened at first and then enraged, so enraged that he striped of his clothes and pulled out his hair. The legend says that when he threw his hair to the earth he created a fierce warrior named Virabhadr who he ordered to kill everyone in the kingdom and behead Daksha !

Virabhadrasana I represents the moment when the warrior arrives at Daksha’s kingdom he did so by thrusting his whole body up through the earth with his sword held with both hands over his head.

Virabhadrasana II represents the moment he made his presence known with his sword ready to strike, his focus and energy on his target.

Virabhadrasana III represents the moment he took action. He lifted his sword into the air and quickly and precisely severed the head of King Daksha.

Shiva arrived to the city shortly afterwards and Virabhadr was absorbed back into his body. When he seen the destruction that he had caused he no longer felt angry but was filled with sorrow. He showed compassion to his father in law by taking his headless body and gave him a new head (of a goat) and brought him back to life. The king bowed to Shiva and no longer loathed him but called him the kind one! Shiva picked up the lifeless body of Sati and lived a life of solitude.

Now I know yoga is supposed to be all about love and light which on the surface this story doesn’t appear to be. We all have our own internal battles and struggles and this is what the story is trying to portray. The story is symbolic, Shiva (and his incarnation Virabhadr) represent the higher self doing battle with the arrogant ego (Daksha) in name of love and the heart (Sati).

When we practice warrior poses we are not celebrating the destruction and carnage but instead we acknowledge that our own spiritual warriors doing battle on a daily basis with our own ego and aviyda (self ignorance) which is the cause of all our internal suffering.

So on the quest to reaching our own personal goals and ambitions we are constantly fighting with ourselves… that little voice inside your own head that tells you that you can’t do it, or your not good enough or its just too hard, why bother, I don’t feel like it etc etc etc. These are the thoughts that we want to overcome and replace them with new thoughts, habits and ideas. Therefore lets make April a month for taking action even if it’s just one step closer towards your goal and Virabhradrasana 3 can symbolise that action…. even with the wobbles and struggles that you might face within the pose itself.

We use cookies on our website to give you the most relevant experience by remembering your preferences and repeat visits. By clicking “Accept”, you consent to the use of ALL the cookies.
Cookie settingsACCEPT
Manage consent

This website uses cookies to improve your experience while you navigate through the website. Out of these, the cookies that are categorized as necessary are stored on your browser as they are essential for the working of basic functionalities of the website. We also use third-party cookies that help us analyze and understand how you use this website. These cookies will be stored in your browser only with your consent. You also have the option to opt-out of these cookies. But opting out of some of these cookies may affect your browsing experience.
Necessary Always Enabled
Necessary cookies are absolutely essential for the website to function properly. These cookies ensure basic functionalities and security features of the website, anonymously.
Functional
Functional cookies help to perform certain functionalities like sharing the content of the website on social media platforms, collect feedbacks, and other third-party features.
Performance
Performance cookies are used to understand and analyze the key performance indexes of the website which helps in delivering a better user experience for the visitors.
Analytics
Analytical cookies are used to understand how visitors interact with the website. These cookies help provide information on metrics the number of visitors, bounce rate, traffic source, etc.
Advertisement
Advertisement cookies are used to provide visitors with relevant ads and marketing campaigns. These cookies track visitors across websites and collect information to provide customized ads.
Others
Other uncategorized cookies are those that are being analyzed and have not been classified into a category as yet.
SAVE & ACCEPT
×
×