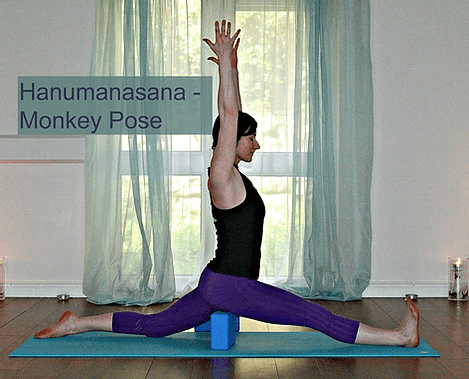 July Pose of the Month

This month I decided to give your wrists a little bit of a break and move to your beloved hamstrings instead.

Yogi Splits is called Monkey or Hanumanasana because it named after a “superhero” in Hindu Mythology. He is the son of the wind (vayu) and a monkey (vanara) woman. Hanumanasana represents the great leap that Hanuman took from the southern tip of India to Sri Lanka to rescue the wife of King Ram who had been kidnapped by the evil demon Ravana who wanted to start a war.

The beauty of this story is that Hanuman was a mischievous child and quite the prankster that eventually the Sun God Surya fatally struck him down, this lead to Vayu the Wind God to take a deep breath, threatening all of humanity, to prevent this from happening the Gods compromised and allowed Hanuman to return on the condition that Hanuman wouldn’t remember his powers and divinity.

Many years later the King asked Hanuman to rescue his wife from the evil demon Ravana, as he had to defend the kingdom, Hanuman was unsure how he was going to rescue her; not remembering his own great powers, despite this he took a leap of faith due to his devotion and loyalty to the King. And the jump that he took is believed to have made the waves run backwards as he stretched his mighty legs. The power of his back leg propelled him skyward, while his front leg reached to touch the Sri Lankan shore. Hanuman started to tune into his powers and capability and later fought of Ravana’s evil army and won the war. “Many of us shrink before impossible tasks, or even tasks that are just a bit hard, because we are just like Hanuman. We easily forget that there is a part of us that is also divine and can accomplish the impossible,” says Alanna Kaivalya, author of Myths of the Asanas (theyogasanctuary.biz).

CAN BE THERAPEUTIC FOR

We use cookies on our website to give you the most relevant experience by remembering your preferences and repeat visits. By clicking “Accept”, you consent to the use of ALL the cookies.
Cookie settingsACCEPT
Manage consent

This website uses cookies to improve your experience while you navigate through the website. Out of these, the cookies that are categorized as necessary are stored on your browser as they are essential for the working of basic functionalities of the website. We also use third-party cookies that help us analyze and understand how you use this website. These cookies will be stored in your browser only with your consent. You also have the option to opt-out of these cookies. But opting out of some of these cookies may affect your browsing experience.
Necessary Always Enabled
Necessary cookies are absolutely essential for the website to function properly. These cookies ensure basic functionalities and security features of the website, anonymously.
Functional
Functional cookies help to perform certain functionalities like sharing the content of the website on social media platforms, collect feedbacks, and other third-party features.
Performance
Performance cookies are used to understand and analyze the key performance indexes of the website which helps in delivering a better user experience for the visitors.
Analytics
Analytical cookies are used to understand how visitors interact with the website. These cookies help provide information on metrics the number of visitors, bounce rate, traffic source, etc.
Advertisement
Advertisement cookies are used to provide visitors with relevant ads and marketing campaigns. These cookies track visitors across websites and collect information to provide customized ads.
Others
Other uncategorized cookies are those that are being analyzed and have not been classified into a category as yet.
SAVE & ACCEPT
×
×